18 years ago in 2001 the last fire was dropped from 30506. There followed a couple of years of negotiations for new contracts with the MHR and then the ULS engineering team finally began the job of stripping the loco down for overhaul. It’s fair to say the guys had a reasonable inkling of what was required to sort the boiler, including copper welding to the inner firebox and complete replacement of the crown stays; the real horror story lay as yet undiscovered deep within the loco. With the motion taken down and the pistons & valves removed something very concerning became apparent…… the cylinder blocks were pushed out at the top by a good ¼”. They were definitely not loose, so there was only one way we were going to be able to fully identify the cause of problem…..the blocks had to come off! That was truly a task the like of which none of us had ever done before but in true ULS style we just took a deep breath and got on with it. All the bolts had to be burned out, not too bad for the top and side ones, but the 2 bottom rows were a complete nightmare; the bolt heads are inside the centre casting so there was no way to drill through, they simply had to be blown out ‘blind’ with the gas axe. If anyone’s ever seen the casting you’ll know there is only one access point and that’s the bit we had to lean in to remove the bolts. You are blocking light with your own body, it really is a hostile environment. Anyhow, eventually it was a case of job done and with the blocks removed we finally saw the cause of the problem…..rust!

Over the years the corrosive atmosphere under the smokebox had taken its toll and the frames became badly corroded to the extent they were 1/3 of normal thickness in places. A simple decision was taken…..we have to strip the front end down completely and replace the front frame sections!!! Daunting was not the word, but we knew we just had to get on with it not really knowing if we would ever be able to achieve the end goal. We measured, we cut, we drilled, we welded and we riveted; the front end was done. How far out we were would be determined when the slide bars (sitting between the cylinder block on the new section and the motion bracket on the old) were fitted. So, cometh the day, how much will we need to file out, how much will we need to weld up??? Well, it’s like this…the pins went in without for ANY adjustment; I know ‘cos I was there! That was when we knew we’d done it….we had successfully part re-framed a steam engine. It was also the first time this motley collection of bumbling buffoons and grumpy old gits had ever shown any signs of emotion – ‘yeah sure, you’re wiping your eye ‘cos you’ve just got a bit of dust in it’!!! Great job guys but will the loco ever really steam again.

The boiler had for a few years been under the care of the MHR boiler team and now it was time for the railway’s engineering team to get involved. The finished the front end and handed the loco over whilst keeping some involvement to help the guys along. They got stuck in, paid staff and volunteers alike and gradually our baby started to look her old self. Then the boiler was lifted in, boiler fittings started to appear, went up and suddenly a shiny coat of black paint was everywhere. 506 in Southern wartime black livery with sunshine lettering was looking glorious in the .  And now I proud and honoured to tell you all she’s ready. The fire was lit last week, safety valves set on Friday and today 506 passed her final steam test.

I cannot begin to say how proud I am of the ULS guys for all they’ve done over the years to get us where we are today; so many times the easiest option would have been to just give up. To all the staff and volunteers from MHR, our deepest gratitude goes out to every one of you for all you have done to help see this project through to fruition. And to enthusiasts and the public alike, who have supported us along the way and stood by us throughout the highs and lows of the past 18 years, I say thank you so much, I hope you all feel it’s been worth the wait.

Mark Collins announces the return of 506 on Wave 105

The first of our Urie S15 steam locomotives officially returns on Sunday the 2nd of June. Be part of her continuing history by booking a ride via the Watercress Lines website. 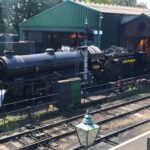 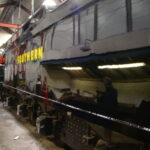 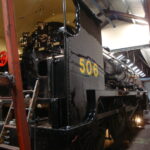