So it’s finally here; the year that will see 506 storming back ‘over the alps’ is at last upon us. We literally are just a few months away from the big day but there is still an awful lot to do. The ULS engineering team have been working in partnership with the MHR staff and volunteers to ensure there is no unnecessary delay and together we have made significant steps forward. It’s impossible to discuss every last detail, but to give a flavour of what’s happened since my last update (embarrassingly as long ago as October), here are some of the things we’ve all been up to. I should apologise at this point for the quality of the images, it’s down to a combination of the camera being on its last legs coupled with appalling light in the wheeldrop!

Without a doubt, the most visible progress before Christmas was the final fitting of the boiler to the frames, following successful hydraulic and steam tests, on 13 December. Some final works were required, namely the smokebox wrapper plate and tube-plate required drilling to accommodate the new frame plate but this was done successfully and the boiler bolted down front and back. Crinolines have been adjusted/fettled and final fitted, the boiler has been lagged, a new back-head cladding sheet has been made and fitted, new firebox cladding has been manufactured and fitted. Smoke deflectors have been repaired as necessary and the main steam pipe holes have been tapped out and new studs made; the R/H steam pipe has been fitted, L/H is in progress. The superheater elements were completed before Christmas and all have now been fitted. New plates were made for the inside of the smokebox for bolting it to the frames and a new plate also made for the lower front of the smokebox. Boiler fittings are starting to appear on the engine with final assembly and fit of brake ejector, safety valves, injector steam valves, water gauges, blower valve and manifold take-off. The L/H injector has been overhauled and fitted, with new brackets and linkage made whilst we await delivery of the new R/H injector. A handful of rivets were required to the lower part of the smokebox ring, another little job now crossed off the ‘to do’ list; at the same time we took the opportunity to replace a couple of rivets missing from the footsteps and rivet the safety chains which sit between loco and tender.

The last major job for the ULS to undertake on 506 was the fabrication of a new ashpan. With no drawings to work from other than a cross sectional one, together with the very mortal remains of the old pan, this proved to be one hell of a challenge; don’t forget also that the boiler is in the frames so the thing had to be made, dry assembled, then taken apart and fitted in sections! Add to that the very complex design and the tight space it fits in I think there would be many (my hand is in the air) who would not have a clue where to start. However, this is the ULS we’re talking about so with the usual never-say-die attitude and a good helping of sheer bloody-mindedness the players got stuck in. I can’t say it was 100% successful first time (don’t want to build the guys up too much!!), but I would suggest 99.99% gives you an idea of what they accomplished. With the ashpan now virtually complete, the brick arch has been made. Pep pipe and ashpan spray valves have been overhauled and fitted.

The tender has moved on leaps and bounds since my last report. The corroded bogie cross bracing was cut out, it would appear that tenders were randomly repaired with angle and T section over the years. As the T section in the required size is obsolete we had to cut universal beam along its length to get the section required and all 6 pieces were successfully riveted on. The tender tank and frame have received new oil piping to the bogie castings along with replacement bolts. The steel frame which supports the floor in front of the shovelling plate (constructed a few years ago) had to be lowered to ensure alignment with the loco fall plate. Considerable work has been done to the running gear, with all bearings re-metalled, bored and scraped in. The horn blocks have been trued up and the axle box faces refaced to return clearances to standard. Spring hangers and brake gear have been refurbished and re-bushed where required and various other parts of the hand brake repaired. A new drawbar pin has been made and fitted. Both sets of footsteps were removed and the bolts used when the steps were made many years ago have been replaced with rivets. With all refurbishment work completed, the bogies were re-wheeled, tank lifted back on and the whole thing lifted and turned to face the same way as the loco – apparently that makes it easier to shovel coal for the fire!!!!! The tender is currently residing in the wheeldrop behind the loco and a start has been made to final painting.

Work on the loco motion has seen the fully overhauled coupling rods fitted, slide bar alignment undertaken, con rods and crossheads fitted. The piston rods have been skimmed, new piston glands manufactured and pistons assembled, fitted and bump clearances checked. Expansion links and new die blocks have been fitted and new castings machined for the engine to tender water feed couplings. Combination levers have been rebushed as required, brake valve overhauled and a new intermediate reservoir coupling machined. All the brake gear has been fully overhauled and refitted, including brake cylinder and weighshaft. The mechanical lubricator pipework has been made and annealed. Buffer overhauls are currently underway, as are new intermediate pipework connections. As the final fitting of components continues, so cleaning and painting tasks are being undertaken in parallel. Another very visible sign of progress has been the fitting of the cab roof and spectacle plate, she really is looking good!

Planning ahead, we have had to make a decision about injectors for both our loco’s. Due to a lack of drawings, it would be extremely difficult to manufacture replacement cones or repair wear damage in the bodies of the ones we have, therefore a decision has been made to finance replacement RH injectors for both 506 and 499. They are currently on order and will be delivered to site fully machined.

Up on 499 some relatively good weather over the Christmas/New Year period, mixed with a good dose of stubborn determination, has allowed us to make progress on the frames. With a constant turnout of 4/5 guys to make the team, we took the opportunity to start riveting up the centre casting. The big advantage we had over 506 of course, was that all the various hold-up bars required were already in existence –all we had to do was remember how to use them!!!! To be serious, the idea was to do a little riveting just to keep our hands in whilst maintaining our focus on 506’s ashpan and other tasks. In fact, the weather was so good and the job went so well that we actually finished – the centre casting is now fully riveted up. Next job is to hang the cylinder blocks, preparatory work is in progress and I’m happy to stick my neck out and forecast the first one going up in April.

Thank you to everyone for your on-going support whether it be financial or moral, this really does keep us going. I’ll try my best to get these blogs out on a more regular basis, meantime please make a note in your diaries to perhaps join us at Ropley for our 2019 open day on June 29th; I know it’s 3 months’ away, but we’re hoping to be able to make a HUGE announcement about a component for 499!!!

See you then?
Mark 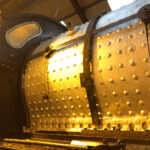 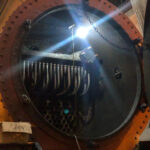 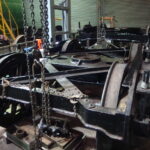 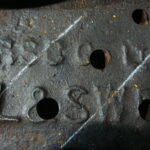 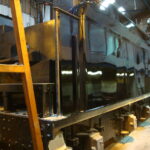 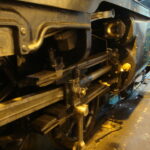 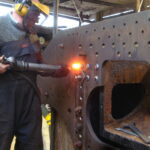 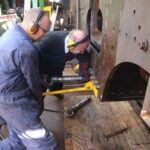 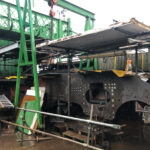 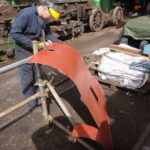