Well, what a glorious Summer we’ve had this year. I hope you all enjoyed the fantastic weather and had some wonderful holidays – or maybe just took the time to soak up the rays in your own garden. Whatever you did, I’m sure you have some great memories to share. What about me? Well, along with the rest of the team, I spent many a weekend dripping sweat and cursing the heat as we continued to progress with 499 at Ropley! Working outdoors we pray for clear weather so I won’t complain about the long dry spell, it would just have been nicer had the temperature been a few degrees lower! Great progress has been made on both locos over the last 3 months. Let’s start by taking a look at the work done by the MHR guys as they continue to push 506 along, assisted by the as necessary:

• All cylinder block bolts have been flogged uptight
• Completed front bogie is now under the loco – we have a 4-6-0!
• Cylinder drain cock linkage fabricated
• New drain cocks are complete, including lapping in. Only outstanding work now is to drill and ream the taper pin holes in the squares for the linkage
• Brake pull rods fettled and assembled (apart from leading set)
• Brake cylinder piston rod bushes made and fitted
• 6 new nuts made
• A start has been made on tidying up the oil pipes into the horn blocks
• Boiler barrel cladding repairs and painting continues
• Main cylinder cladding finished and fitted
• A start has been made on making a new vac cylinder piston gland cover plate
• A bit of progress on the rubber front has also been made
• Expansion link rivets made and fitted
• One return crank pin ground by a contractor
• Side rods sent away for machining
• Tops for the bogie spring link blocks have been machined
• Big ends re-metalled
• Return crank rods – one twist removed, large holes bored – taper pin hole re-drilled
• Commenced manufacturing of axle box dust seal parts
• Return crank rod bush made and fitted
• Slidebar alignment is slowly progressing
• Various oil pipes annealed, straightened/tidied up
• Various painting tasks being progressed
• Two new die blocks made
• Driving axle springs fitted
• Brake cylinders are pretty much complete, just require testing
• Nuts and pipes unions/nipples made for the lubrication system
• Both expansion links re-fitted – L/H has been re-bushed

The tender, which I previously reported had been moved into the yard, has now been stripped for overhaul; the tank is sat on blocks outside the main shed whilst the bogie frames and wheels are inside. A number of strengthening angles on the bogies have been identified for replacement due to excessive corrosion, so new material has been ordered. In the meantime, work has commenced to clean the rest of the frames. The buffers which were at the front of the tender for shunting round the yard in its previous life as a testing station have now been removed, as has the fabricated handbrake column. All springs have been removed and are being tested, and the brake cylinder has been overhauled. The white metal has been run out of the axle box crowns and all boxes are being assessed for repairs. Elsewhere in the machine shop the tender brake crossbeam ends have been built up with weld and re-machined, split pins drilled out of the horn tie studs, brake trunnions have been modified to accept grease nipples and a start made on grinding off ‘roll-over’ on the tender wheel sets.

Whilst 506 is in the final stages of its overhaul, exciting things have been happening on 499. First off, we took delivery in June of THE key component for the whole project – a ‘stovepipe’ chimney! It was delivered shortly before our open day so we had just enough time to prepare it for the grand unveiling; all we need to do now is complete the loco to put it on! In fact we have two ‘stovepipes’, thinking ahead we decided to have a second cast which could be cut down to ultimately allow the loco to go on hire to heritage lines with a lower loading gauge and return with the chimney still in one piece! This is now displayed in the yard at Ropley on boiler 451. Having had that very successful open day at the end of June, we could now crack on with the front end rebuild. First ‘little’ job in the queue was to remove the R/H cylinder block which had been left on the loco for our open day; by lunchtime on the Sunday it was off. Next up, clean off the centre casting and prepare it for lifting. Some fettling was required, mainly building up wasted areas with weld on the top of the casting and cleaning off any grinding dust or other residual deposits, particularly from the mating faces; the same process applied to the inside of the frames. A thin coat of oil was then applied as protection and the casting moved into position ready for lifting with the hoist. Prior to that we had removed the old front platform which had been temporarily bolted low in the frames to act as a safe standing platform whilst the cylinder block holes were reamed. The final part of the pre-lift preparation was to remove the new buffer beam which had been bolted on to give a degree of strength to the frames. The casting has large lugs at the bottom which pull up to the bottom edge of the frames; unlike 506 we do not have the space to slide the casting in from the front so both frame sections have to be sprung apart to allow the lugs to drop in from the top … basically we had to open the frames by approximately 2.5″ to get the casting in. The hoist was readied, gantry moved into place, feet locked and the chains and strops positioned. Raising the block to the maximum height literally gave us just enough room to slide the casting over the top of the frames! Once over, it was lowered and the frames sprung to allow the lugs to slide between the sections; the frames were then closed and accommodation bolts fitted to secure the casting.

Next job was to lift the refurbished middle stretcher in to place, but before that the motion brackets had to be removed… again! The stretcher is a lot lighter than the front casting so easier to manoeuvre, but it actually sits either side of the joggle in the frames so there was still a degree of ‘jiggery/pokery’ required to get the thing to fit. Eventually it was located and held up with yet more accommodation bolts so we could proceed to make and drill a few remaining holes on the joggles, ream all holes for riveting then countersink as necessary. Finally, after so many promises, the day finally came when riveting could start. The team got stuck in and over two days the stretcher was completely riveted and, with a bit of time to spare and the equipment set up, we riveted on a couple of spring hanger pins ‘cos we could’! The process went perfectly, although we did have to make up yet another holding-up bar for a few rivets which are obstructed by wing plates. It’s impossible to put into words how good it felt to be ‘back on the guns’. With the stretcher now riveted up, the next job will be the centre casting; preparatory work has been completed with holes reamed and countersunk where necessary.

Not much more will be done on 499 during October, however, as our attention turns back to 506 and the fabrication of a new ashpan. This is a far from straightforward design, and with no drawings available the only sensible way to deal with this is to the boiler in the frames and work from there. And so it came to pass that on 25 September 2018, boiler 755 was reunited with 506’s frames for the first time in 17 years. It is only a temporary fit whilst we fabricate the ashpan and finish a couple of other jobs but it is a wonderful sight to see. The boiler is likely to be lifted again before Christmas as together we work towards hydraulic and steam tests … the eventual return to traffic of 506 moves ever closer! 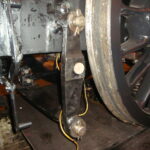 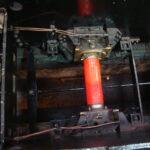 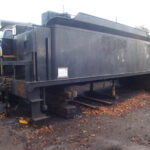 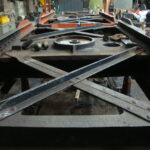 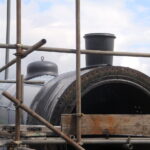 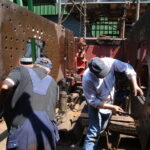 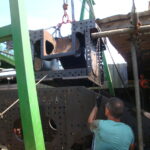 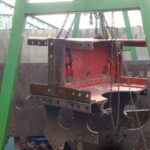 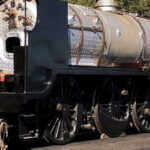 And of course 506 will be there! One for the diary.