At last the engineering team has begun working on 2 fronts. In the last update, it was announced that we had completed the front end rebuild of 30506, but since then we have completed a number of more straightforward jobs on the loco. Three rivets holding the centre stretcher had been identified as loose, so these have now been removed, the holes cleaned up/prepared and new rivets fitted. Work on the brake hangers has continued and we will soon be in a position to rivet these to the frames. Our previous attempt to repair the cab toolboxes did not meet the standards we like to see so these have now been scrapped, new ones fabricated and bolted/riveted in place. For the past couple of months, work has been carried out to scrape and then steam clean the frames and begin painting areas which will not easily be accessible once the wheels are back! Running plate, valences and cab sides are all receiving attention.

On the mechanical side, the main areas of focus are the axle boxes, with 4 existing boxes plus 2 new castings being machined and drilled for lining plates. Boxes have been built up with bronze weld as necessary. New steel horn liner plates have been made and are currently being machined, the horn faces are being machined and a good start has been made to frame alignment. Slide bars have been ground and slide bar alignment plates machined. A start has also been made on fabricating a new ashpan; this will take some time as it is quite a complex component.

While all this has been going on, significant progress has been made with the front bogie. It’s probably easier to list the work done rather than try to put it into a ‘story’:

in the boiler shop, progress on boiler 755 has been quite outstanding. The beachhead fittings are now largely in place along with the regulator handle and a fully overhauled regulator valve. The firebox sling hangers and stays, all direct crown stays and the crown bars are all fitted. The superheated flues have had the copper ends brazed on and small tubes removed from and annealed. ALL are now fitted in the boiler, leaving just the superheater elements to sort out. As we look at it now, with smokebox door and chimney fitted, and regulator dome lined up for fitting, we have almost got a finished boiler!

The other piece of really exciting news is that the engineering team have restarted the restoration of 499. Work has been going on for a while to clean up the centre casting prior to lifting it back between the frames. We are also now working inside the rear section of frames to clean those up. The BIG news though is that we now have a cylinder block on; the left-hand block was lifted into place a couple of weeks ago and located with steel dowels and accommodation bolts. The next part of the process is to open out the holes drilled in the frames to full size ready for fitted bolts. The block will be taken down once this is done so we can repeat the process with the R/H side before dropping the casting in for riveting. With on our side, we could have the casting and both blocks riveted and bolted up by our 2018 open day!

Aside from the engineering works, the ULS have at long last acquired a permanent sales cabin which has been erected near the top car park at Ropley. Not only do we now have somewhere to display the book collections and other items generously donated for fundraising sales, but the stock is now much better protected from deterioration. My thanks to all concerned at Ropley who helped facilitate this and also to Matt from Elfords Sheds for the very generous discount offered when we bought the building. The cabin is perfectly placed to sit in the sunshine and admire the work going on with 499 whilst reading a good book … bought from us, of course! In all seriousness, every penny raised by the sales team will go directly into the restoration of the loco. 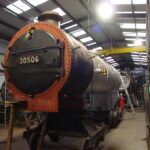 Well, it’s certainly been a challenging year for everyone but through the year the team have still made significant progress on S15 499! Thank you all who have supported the Urie Society.