In the July report we commented that we had fully riveted the centre casting of 30506 to the new frame sections. This was sort of true as the two remaining rows of holes at the bottom of the casting were deemed to be too difficult to rivet, largely due to inaccessibility on the inside for the holder-up, and would therefore be bolted instead. In true ULS style, however, a lot of head scratching eventually evolved into another design of holding-up bar, one rivet in as a test, the idea worked perfectly and off we went. The centre casting IS now fully riveted up! A number of the casting rivets sit beneath the cylinder blocks so those heads then had to be ground flush.

The next major job was to finally fit the cylinder blocks onto the frames. Our well reported lifting cradle was used, following the same procedure as when they were trial fitted. Just prior to lifting, the mating surfaces were coated with a ‘Stratton patented’ mix to ensure a tight seal. Everything went without a hitch and the blocks were fitted with temporary accommodation bolts. The final fitted bolts are being made by the MHR guys in the machine shop, hopefully, all will be through and fitted by the end of the year.

Whilst waiting for the bolts, we have taken the opportunity to start rebuilding the front of the loco. The valence is now complete on both sides, front curved sections riveted to the buffer beam at one end and the straight sections which sit above the cylinder blocks at the other. The latter have, in turn, been welded to the part remaining on the loco. The valence supports the running plate on the outer extreme of the engine, the inner edge being supported by angle which has been cut, drilled and riveted to the new frame sections. To the front of the cylinder blocks the running plate curves down to the buffer beam and comprises two separate sections for removal during piston/valve exams. On both sides the original top piece was salvageable, but the bottom part required replacement. To this end, new plate has been cut, rolled, trimmed, drilled and countersunk on site by our guys. Butt straps for bolting the two sections together have been cut and riveted to the lower pieces. Up on top, the new running plate has been cut, profiled, drilled and countersunk for the rivet holes around the edges. Current work revolves around drilling, countersinking and tapping holes which are necessary to bolt the running plate to the top of the cylinder blocks. Lastly on the rebuild side, both sets of front footsteps have been riveted back on the loco, lamp irons and grab handles fitted. Where possible, frame sections have been cleaned down and a coat of red oxide primer applied.

The ULS engineering team had a temporary break from riveting back in the Summer – with the boiler on its back but due to be turned fairly shortly, the opportunity was taken to fabricate and place into storage a new ashpan ring. Out in the yard our newest volunteers have begun to dismantle the smokebox on one of our spare boilers. There is a specific reason for this … you will all find out what that is in due course!!

As a final reminder to ULS members, our AGM is Saturday 19 November. At midday you will have full access to both 30506 and 499, with an opportunity to discuss progress and plans with the committee. A small sales stand will be open and the photographic archives will be available for viewing. Non-members are also welcome to come along and see our work. At 2:30pm, members only will gather in the education room (workshop viewing gallery) for the usual reports and formalities of an AGM. I hope to see as many of you as possible on the day. 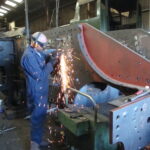 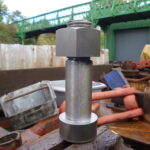 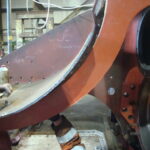 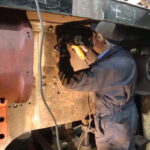 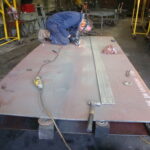 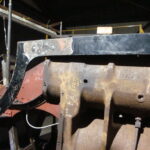 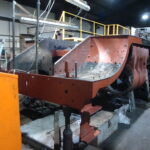 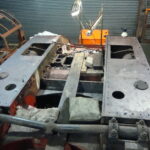 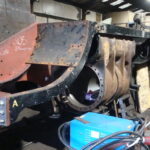 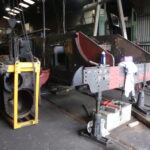 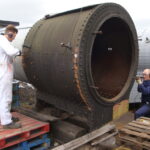 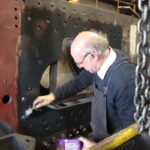 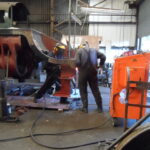 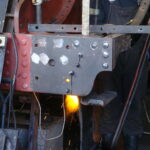 55 thoughts on “Lots of head scratching”