Work on the new frame sections has proceeded well with the right-hand frame welded after a great deal of effort was expended on finding a welder with the relevant experience and certification. Our thanks to Mark and Steve for arranging this and to the the railway staff for their guidance, and not least to the welder, Paul, who has gone out of his way to undertake the work.

Each frame plate has been drilled and marked off from the old plate except in the heavily corroded areas where we had to measure and mark out the centres for those holes. As some discrepancies were found between the old plate and the drawings, we have drilled holes undersize to allow for any adjustment. To speed up the drilling process, we have purchased a heavy duty magnetic drill which can cope with drilling through the 1 1/4” plate! We drilled a pilot hole first of all then used a 1/2” drill and a 7/8” before running through with the final size. With the use of the railway’s own Mag drill, we were able to drill the left-hand side in just three weeks after cutting the old frame off. This then allowed Paul to weld the new plate both sides over one weekend in early May. The whole operation worked well and involved welding on and then removing the stiffening plates from either side.

While work has been undertaken on 30506 in the main shed, over the first four months of 2015, 30499 has been dismantled as and when time and people have allowed – all of this, of course, out in the open air!

The work has involved removing the right-hand cylinder block and the motion bracket as we have cut the old frame away from a point mid-way over the axle box area on the leading driving wheel. This was to avoid the huge crack in the frame just to the front of this point where the frame folds in slightly. This area was very prone to breaking. The removal of the cylinder bolts followed the same process as with 30506. 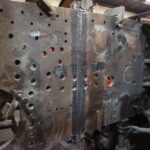 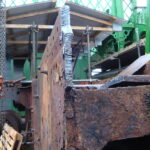 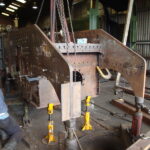 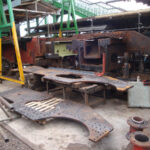